In the last few years, the treatment of esophageal hemangiomas has evolved from open surgery, such as esophagectomy, tumor enucleation, and sclerotherapy, to endoscopic intervention.3

The aim of this report was to describe an adult patient with a very unusual large arteriovenous esophageal hemangioma.

A 52-year-old otherwise healthy Caucasian male presented to the emergency department of a major tertiary medical center with complaints of cough and pressing chest pain of 1 month duration. There were no airway or gastrointestinal symptoms. The patient did not smoke, and he had no contributory family history. Detailed physical examination yielded no pathologic findings. Results of complete blood count, blood chemistry, electrocardiography, and chest x-ray were normal or negative. Chest CT, performed as part of the comprehensive work-up, revealed a cylindrical mass in the upper esophagus, 14 cm long by 2.5 cm wide (Fig. 1). It appeared to be hanging on a narrow stalk attached to the posterior wall of the cricopharyngeus muscle (upper esophageal sphincter), extending from the hypopharynx cranially and filling the lumen of the upper and middle esophagus. 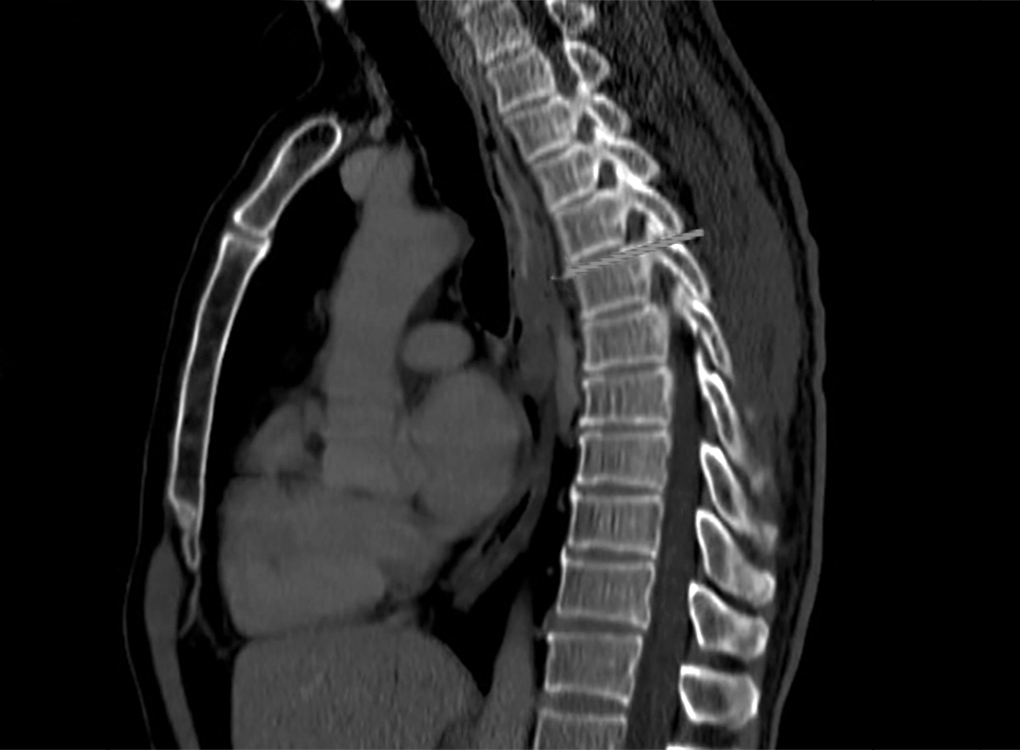 Gastroscopy revealed a mobile polypoid structure with normal overlying mucosa extending from the upper to the middle esophagus with an overall length of about 17 cm. Biopsy study showed normal esophageal mucosa. On endoscopic ultrasound, the polypoid structure had a normal-appearing wall structure and a mixed echogenic pattern with multiple small vessels. No adenopathy was identified.

The patient was then referred to the otolaryngology department. On flexible endoscopy, a protrusion of the posterior aspect of the lower laryngeal wall was noted. The pyriform sinuses could not be visualized. There was no salivary retention or neck lymphadenopathy.

A multidisciplinary panel was convened to determine the optimal treatment approach. Removal of the mass was deemed necessary; open surgery was excluded because of its invasiveness and risks. A combined gastroscopic and laryngoscopic approach was chosen. The procedure and risks were explained to the patient, who provided written informed consent.

The patient was placed under general anesthesia, and the invasive endoscopist inserted a flexible therapeutic video gastroscope (GIF 1T, Olympus, Japan) to visualize the mass (Fig. 2). Using endoscopic forceps, the endoscopist grasped the distal part of the mass and extracted it through the patient's mouth while the proximal part was still attached to the upper esophagus (Fig. 3). At this point, the otolaryngologist introduced a rigid esophagoscope. The stalk attaching the mass to the upper esophagus was identified, and the mass was separated with a harmonic scalpel.

Pathologic evaluation showed a polypoid mass covered with squamous epithelium, with multiple engorged blood vessels. Some of the vessels were wide and surrounded by a thin wall, and others were narrow with a thick wall. The histology was compatible with arteriovenous hemangioma. There was no evidence of malignancy.

At the 7-month postoperative follow-up, the patient appeared well, with no dyspnea or dysphagia.

In 1976, Feist et al7 were the first to describe a giant (12 × 5 cm) hemangioma of the proximal esophagus. More than 30 years later, Kim et al5 reported a similar case of an 8.5 × 6.5 × 4 cm hemangioma of the distal esophagus. Both these tumors were submucosal and attached to the esophageal wall by a thin stalk, as in the present case. However, unlike the hemangioma described here, they were resected by major open surgery. Our search of the literature yielded no previous cases of endoscopic excision of a large esophageal hemangioma.

Notwithstanding its rarity, large esophageal hemangioma should be part of the differential diagnosis of dyspnea, dysphagia, persistent cough, or chest pain. The tumor is both diagnostically challenging and difficult to treat with gastroscopy in a single procedure. This report shows that a combined approach by a gastroenterologist and otolaryngologist, working cooperatively, can facilitate the correct diagnosis and provide optimum treatment.

View of the mass filling the esophagus at the gastroscopic examination 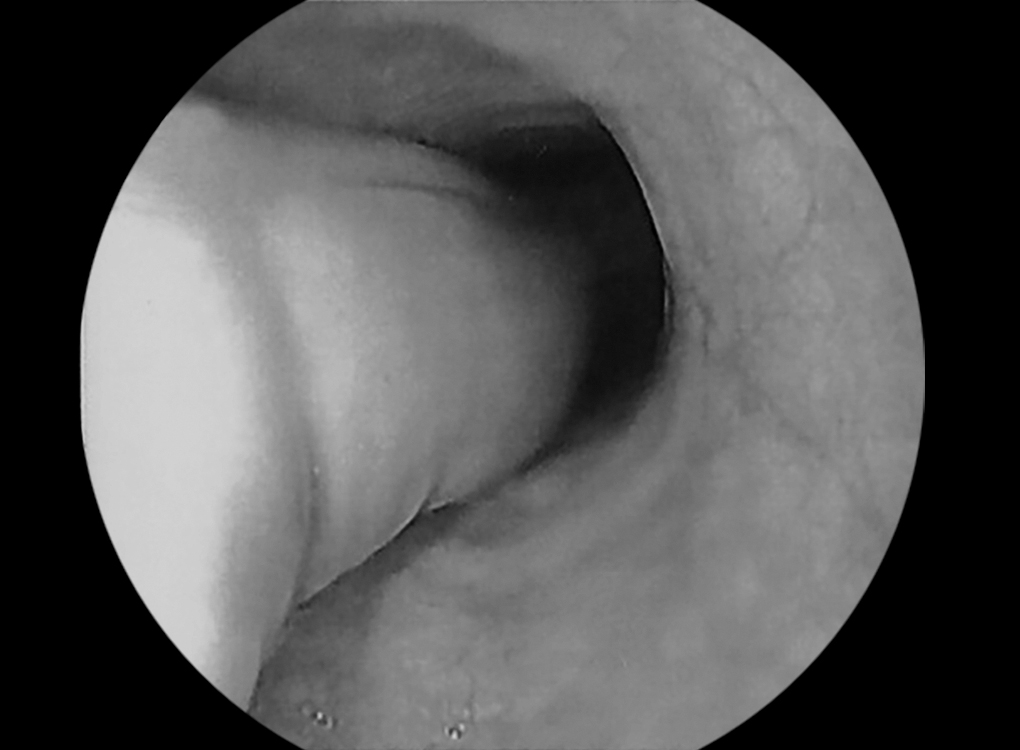 Resected mass. The proximal part is on the right side and the distal part on the left 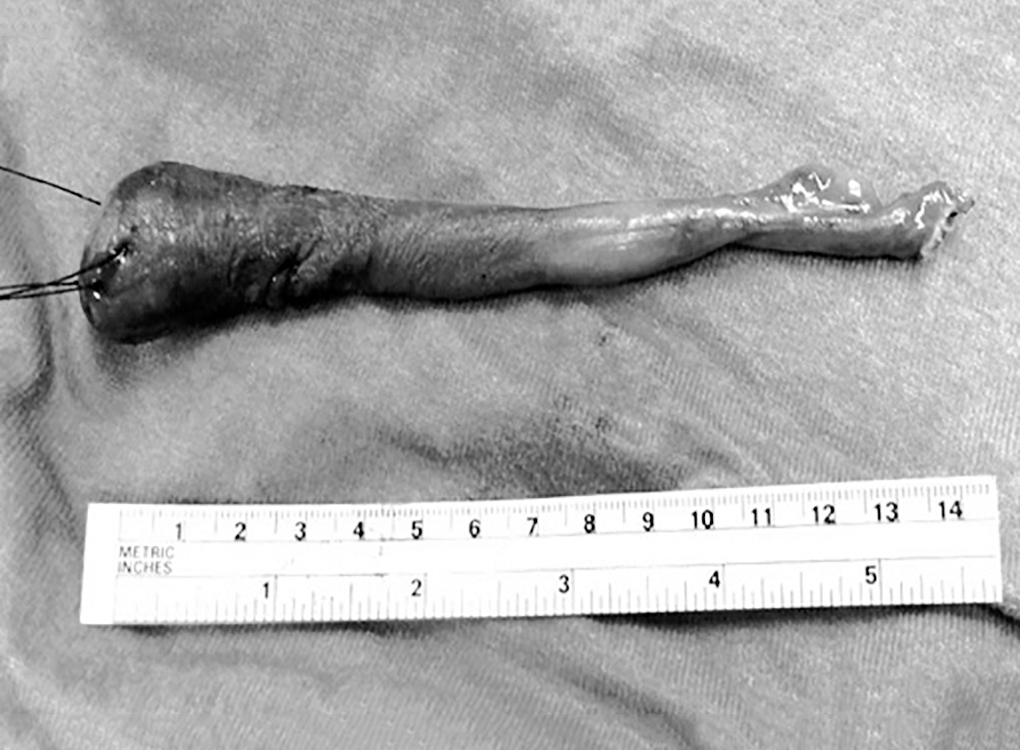