Introduction: Supraglottic stenosis is an unusual subset of laryngotracheal stenosis that has distinctly different causes, associated symptoms, and treatment options, some of which are novel. This is a case series of patients with supraglottic stenosis and the individual treatment options used for each of these patients, and the outcome over a period of 8 years (2010–2017) is analyzed.

Materials and methods: Fourteen patients of supraglottic stenosis due to different causes were identified. Quantum of surgery involved release of stenotic segment and placement of stent. All patients underwent CT neck for assessment of the site and extent of stenosis. Endoscopic assisted excision of stenotic segment was performed in 12 patients. Laryngofissure approach was used in two patients as a surgical approach. Periodic assessment of airway was done to ascertain the patency postoperatively.

Results: Successful decannulation was possible in 12 out of 14 patients. Stent was removed for all patients. Eleven of the 14 patients are phonating and swallowing well. Other three patients were advised modified swallowing techniques. These patients had esophageal stricture which was released at the same sitting.

Supraglottic stenosis poses serious challenges to the practicing otolaryngologist in terms of diagnosis and management. Coexisting conditions such as esophageal stricture make the management plans multifactorial. This study aims at focusing the various treatment plans with successful outcomes for 14 patients who were diagnosed with supraglottic stenosis over a period of 8 years (2010–2017).

Fourteen patients diagnosed with supraglottic stenosis due to various causes from the year January 2010 to December 2017 were included in the study.

In the study sample, nine were males and five were females. The age-group ranged from 4 to 56 years (mean—32.35 years).

All patients underwent tracheostomy at the initial assessment to secure airway and quantum of surgery varied based on their etiology and clinical features.

The extent and the location of stenosis were assessed using CT and video laryngoscopy, and flexible fiber-optic laryngoscopy was used to assess the airway and the extent of the stenosis, and grading was done as per the findings.

Patients underwent FOL at weekly intervals for assessment of the stent and its position. The stent was removed after 3–9 months (mean—5 months) after the complete evaluation of airway by FOL.

Decannulation of tracheostomy tube was done as per institutional protocol based on the assessment of airway and patients spigotted. Follow-up was done monthly for a year and at three-month intervals thereafter for next 2 years.

Fourteen patients diagnosed with supraglottic stenosis were included in the study of which nine are males and five females. 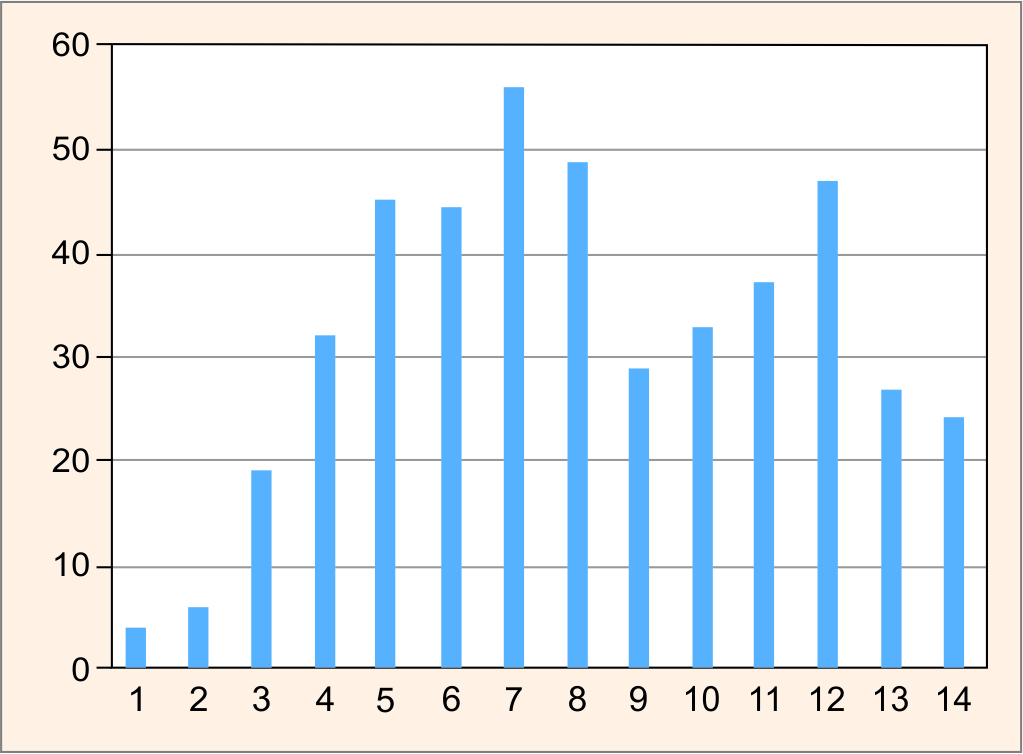 The various complaints with which the patients presented include respiratory distress, muffled voice, aspiration, and difficulty in swallowing as shown in Figure 2. 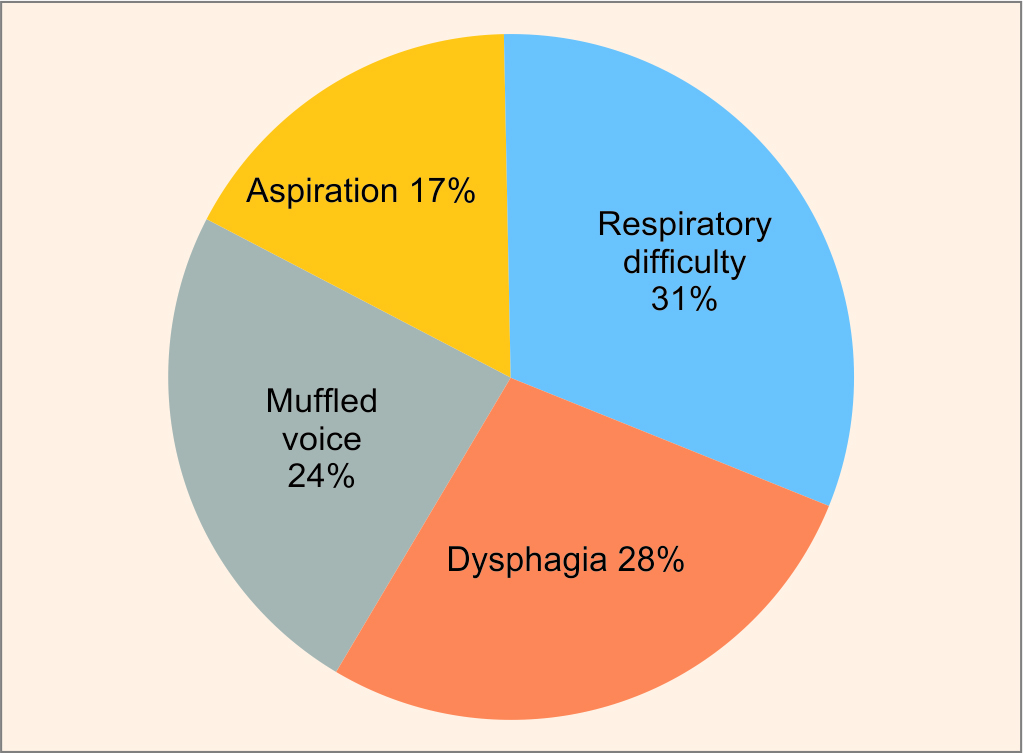 Individual patient profile based on etiology.

Patient presented to us at 4 years of age, previously tracheostomized due to stridor. Fiber-optic laryngoscopy assessment showed glottic web with fibrous bands between the arytenoids. Release of fibrosis and glottic web was done using KTP laser. Keel stent was placed, and continuous monitoring was done. Stent was removed after 5 months. Patient was decannulated after 2 weeks.

Patient presented to us at 6 years of age. History of tracheostomy and stenosis release was done at the age of 4, but failed decannulation. After initial assessment, patient underwent stenosis release using KTP laser and coblator. Keel stent was placed. Stent was removed after 5 months. Patient was decannulated after 2 weeks.

The various parameters assessed in FOL include assessment of glottic chink, vocal cord movement, signs of aspiration, and the extent of stenosis; subsites involved and involvement of subglottis and glottis were also assessed.

Glottic chink and vocal cords were not visualized in 12 patients. Signs of aspiration were seen in five patients, and glottis was involved in two patients (congenital).

All patients underwent computerized tomography to assess the extent and location of stenosis.

Two patients were diagnosed to have congenital stenosis presented at the age of 4 and 6 years with tracheostomy. FOL revealed supraglottic stenosis with glottic web which was identified through retrograde endoscopy.

Of the five patients who had history of OPC poisoning, three had esophageal stricture along with supraglottic stenosis.

All patients underwent initial surgery which aimed at release of the stenotic segment. Endoscopic procedures were done using KTP 532, coblator, or laryngeal microdebrider.

Following the release of stenotic segment stenting was done to prevent adhesion. 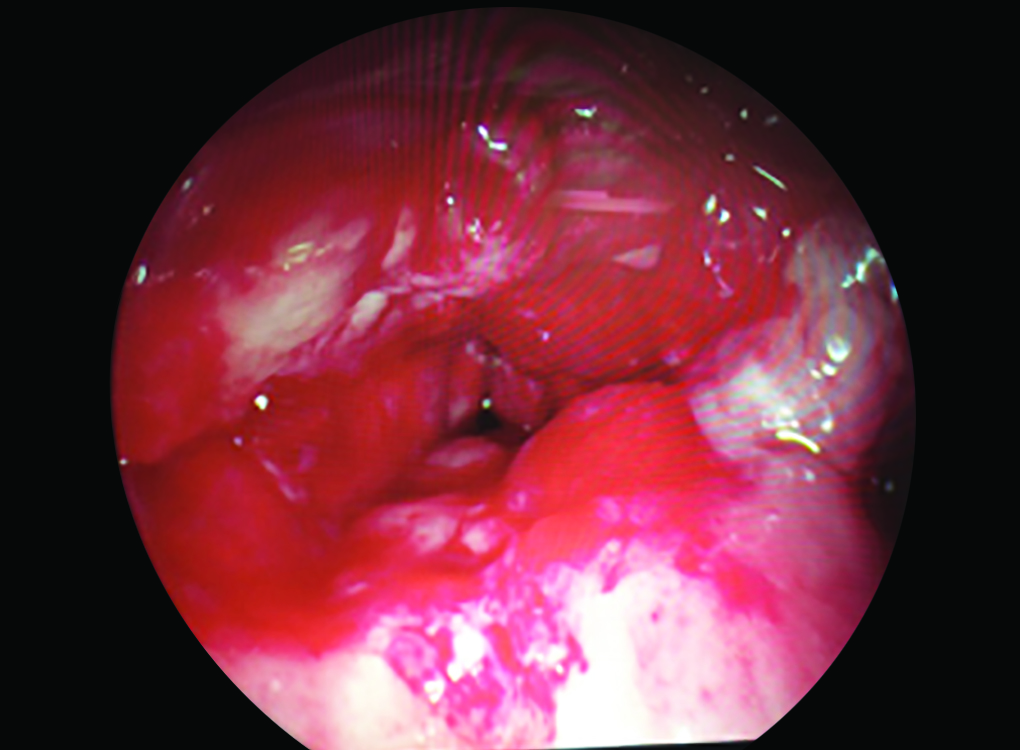 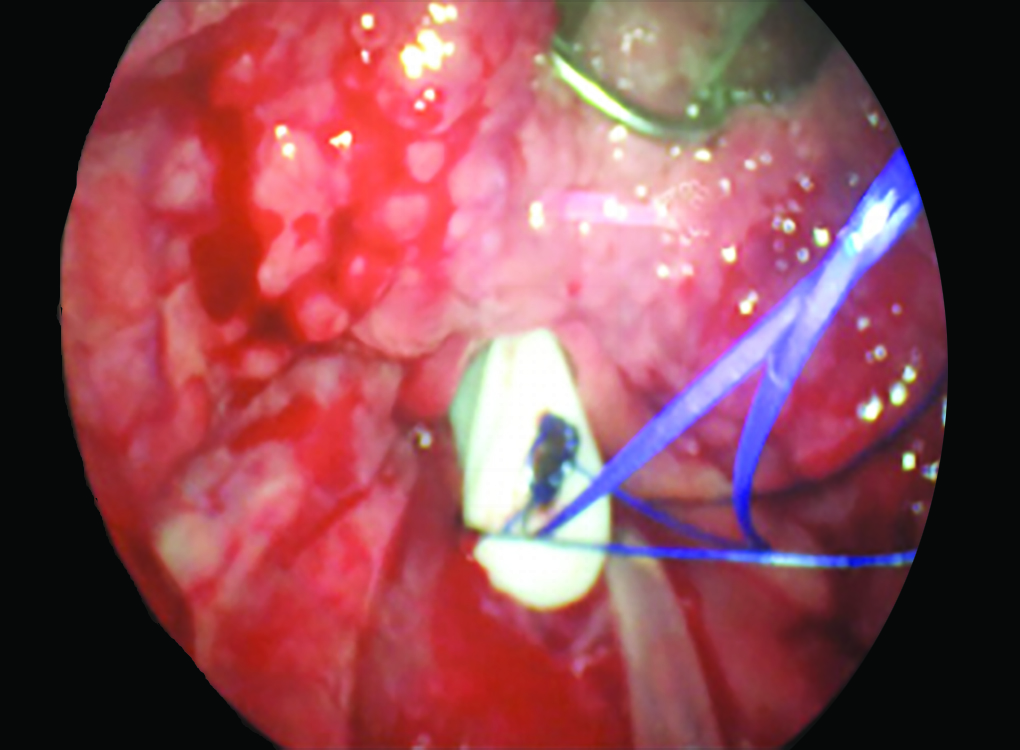 Four patients underwent staged surgical procedures for release of stenosis and followed up for definitive treatment.

The stent was secured with buttons placed and sutured over the skin (Fig. 5). 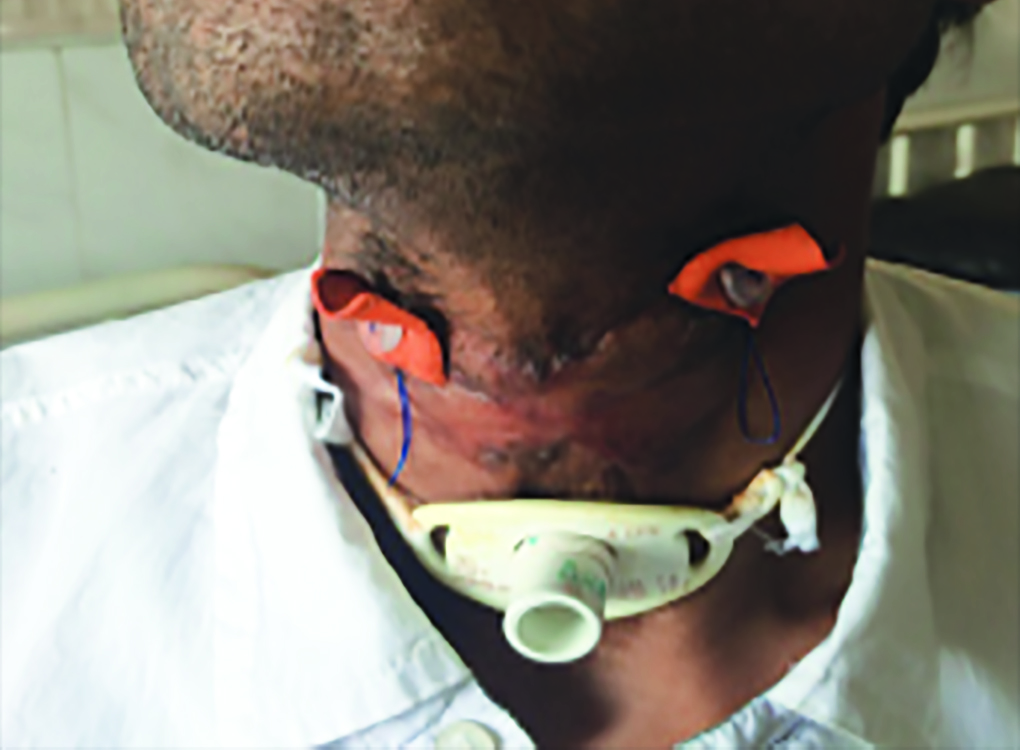 Laryngofissure approach for release of stenosis was done for two patients with severe stenosis.

Three patients with associated esophageal stricture underwent rigid esophagoscopy and dilatation in the same sitting as that of stenosis release.

All patients had Ryles tube feeding for at least 2 weeks postoperatively.

FOL was done after 1 week, to assess the airway and position of the stent.

Three patients had accidental displacement of stent, which was replaced in position.1,2

Stent was removed for all patients at 3–5 months (mean—4 months).

After stent removal, patients underwent spigotting of tracheostomy tube for 24 hours and decannulation as per protocol. Successful decannulation was done in 12 out of 14 patients (85.7%). The decannulation period was varied from 1 to 4 years.

The two patients who could not be decannulated had history of OPC poisoning and are on regular follow-up.

After decannulation, Ryles tube was removed and feeding was encouraged. Eleven of the 14 patients are phonating and swallowing well. The other three patients were advised modified swallowing techniques to prevent aspiration.

The varied treatment strategies that have to be applied make the diagnosis and management of supraglottic stenosis a challenging entity.

In this study, each patient underwent variety of treatment modality based on the etiology and the individual extent of lesion.

The etiological factors assessed in his study include trauma, caustic ingestion, and radiation being the common ones which coincides with our study though the poisoning history in the patients included in this study is OPC poisoning. The injuries and edema are relatively less in our patients, and hence, esophagoscopy with dilatation was sufficient.

In Kacker et al.’s7 study on surgical management of supraglottic stenosis with a sample size of five patients in which trauma being a cause in three patients, stenting was done by open approach using keel stent and stent was removed in an average of 3 months8,9 and the decannulation time being 1–4 years which coincides with our study. He has also discussed about the displacement of stent in a patient for whom laryngofissure approach was done to release fibrosis. Stent displacement occurred in three (21.4%) of our patients who had to undergo emergency procedure to replace the stent.3

Congenital stenosis was seen in two patients in our study with associated involvement of glottis web. Laser excision and release of web showed good results. Histopathology of the web showed no evidence of acid fast bacilli or any granulomatous lesion. Walner et al.8 in their study discussed the various causes of supraglottic stenosis in infants such as intubation, infection, prematurity, previous surgeries, and caustic ingestion. The two patients who were included in the study had history of intubation and prematurity which could be correlated.

All patients in this study underwent KTP 532-nm laser excision of stenotic segment. Laser offers effective release associated with good hemostasis and low incidence of postoperative fibrosis. In Simpson et al.’s6 study, though they have used carbon dioxide laser for the treatment of supraglottic stenosis, have proposed KTP laser as a safe and effective alternative.

This study has its own limitations like a small sample size, but considering that there is not much consensus in the literature to address the condition with various treatment strategies, it has highlighted on the various elements such as etiology, surgery quantum, and management of associated conditions like esophageal stricture.

Supraglottic stenosis if identified at the earliest has good surgical outcomes. Endoscopic KTP 532-nm laser is an effective method for stenosis release and has good surgical outcomes, when combined with other modalities. A meticulous follow-up of the state of the airway postoperatively by flexible fiber-optic endoscopy is required for successful outcomes. Treatment of supraglottic stenosis is a surgeon’s dilemma, and individualized treatment is a reality for effective results.