Aim and objective: To report a rare case of fungal rhinosinusitis with Gradenigo’s syndrome as the presenting feature.

Background: Fungal petrositis has been sparingly reported with Aspergillus and Mucor secondary only to infection of mastoid part of temporal bone or intracranial extension.

Case description: We report a case of a 50-year-old diabetic male who presented with classical Gradenigo’s triad for 3 months duration without any associated nasal complaints and was thereby treated on lines of complicated chronic otitis media (COM). Failure to respond to conventional treatment, diagnostic nasal endoscopy and histopathology helped in establishing the diagnosis of mucormycosis and plan effective treatment.

Conclusion: A chronic history suggestive of ear disease and absence of nasal symptoms should not rule out the possibility of mucormycosis, especially in an immunocompromised host.

Clinical significance: Rhino-orbital variant can have petrous apex involvement as a complication and in cases where management of COM on conventional lines does not cause improvement of petrositis, fungal etiology should be considered.

Mucormycosis is a rare, aggressive, and fatal fungal infection usually affecting immunocompromised patients.1 Rhino-orbito-cerebral variant is its most common type.2 Petrous apicitis is the osteomyelitis of the petrous apex of the temporal bone usually secondary to complicated chronic otitis media (COM). The patient usually presents with neuralgic headache, same sided ear discharge, and sixth cranial palsy, which constitutes the Gradenigo’s triad. The diagnosis of petrous apicitis of fungal etiology represents a unique challenge due to its rarity and atypical clinical presentations.3 Few cases have been already reported in the world literature showing involvement of temporal bone by mucormycosis but almost all show involvement of mastoid part of temporal bone causing facial nerve palsy in immunocompromised patients.4

We present a unique case, with mucormycotic involvement of petrous part of temporal bone and a classical Gradenigo’s triad as presenting complaint.

A 50-year-old diabetic male presented with right-sided severe, continuous facial pain with loss of touch sensation on the right side of the face for 3 months. It was associated with foul-smelling, profuse, purulent discharge from the right ear with decreased hearing, and double vision. The patient had no history of nasal obstruction, nasal discharge, sneezing, snoring, recent dental problems, local surgeries, or addictions. The patient developed drooping of the right eyelid for the last 3 days, which brought him to the outpatient department.

On examination, the patient had right eye ptosis (Fig. 1A) and lateral rectus palsy (Fig. 1B). The sensory loss was present on the right side of the face with associated masseteric weakness and absent gag reflex. The right ear had profuse discharge, which on suctioning showed a central perforation with granulation tissue and discharge in the middle ear and mild conductive hearing loss (Fig. 2). Anterior rhinoscopy and oral cavity examination were grossly normal. 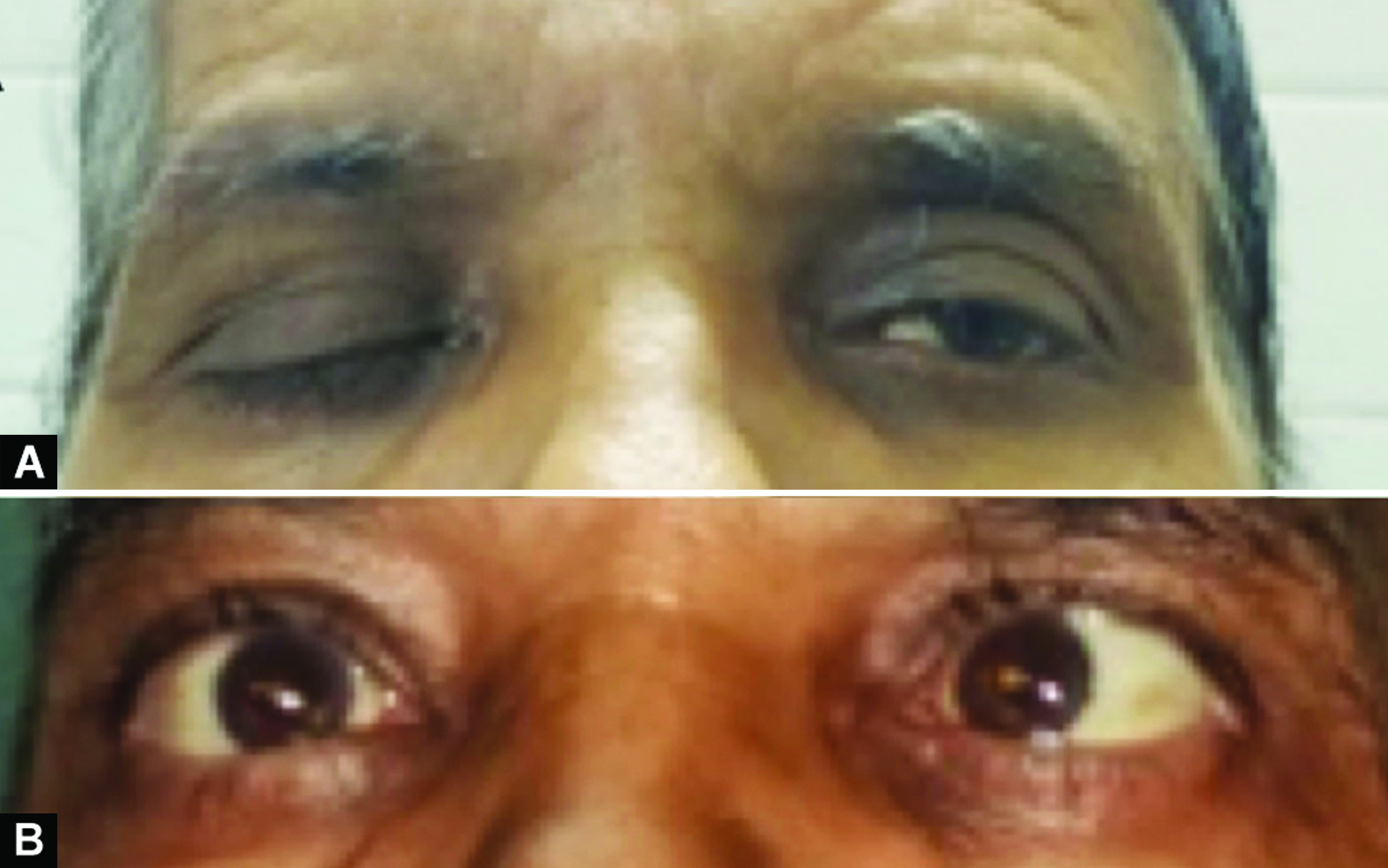 Figs 1A and B: (A) Initial presentation of the patient with right eye ptosis; (B) Lateral rectus palsy on right lateral gaze

Based on the history, examination, and CT scan, a working diagnosis of complicated chronic active squamosal otitis media with Gradenigo’s syndrome was made and the patient was started on intravenous antibiotics. An aural swab for gram’s stain was sent before starting antibiotics, which came as pus cells. No improvement was seen after 48 hours.

So a nasal endoscopy was done, which showed unhealthy, polypoidal tissue in the right middle meatus. Pus discharge was seen from the right sphenoethmoidal recess. A fungal smear and gram’s stain were sent from the nasal cavity, both of which came negative. So the patient was taken up under general anesthesia for debridement.

Intraoperative findings showed unhealthy, polypoidal tissue involving the maxillary sinus, anterior, posterior ethmoids, and sphenoid sinus, which was debrided endoscopically. The tissue was sent for fungal smear and culture and gram’s stain, which again came negative. However, on strong clinical suspicion, empirical amphotericin B therapy was started. The patient started to respond, and the final diagnosis was reached after the biopsy report confirmed the presence of fulminant necrotizing rhinosinusitis highlighted on periodic acid–Schiff (PAS) staining suggestive of mucormycosis. The tissue from the ear was also sent for biopsy, which showed granulation tissue only. Intravenous liposomal amphotericin B was continued with regular monitoring of electrolytes, sugar, and renal function.

After completion of a cumulative dose of 1.5 g of amphotericin, the patient had significant improvement in pain and ptosis (Fig. 4), thereby confirming our final diagnosis of fungal petrositis secondary to rhino-orbital mucormycosis rather than COM. After 1 year of regular follow-up, the patient is doing well except for residual lateral rectus palsy (Fig. 5).

Fig. 4: Improvement in right eye ptosis after completion of 1.5 g of amphotericin B 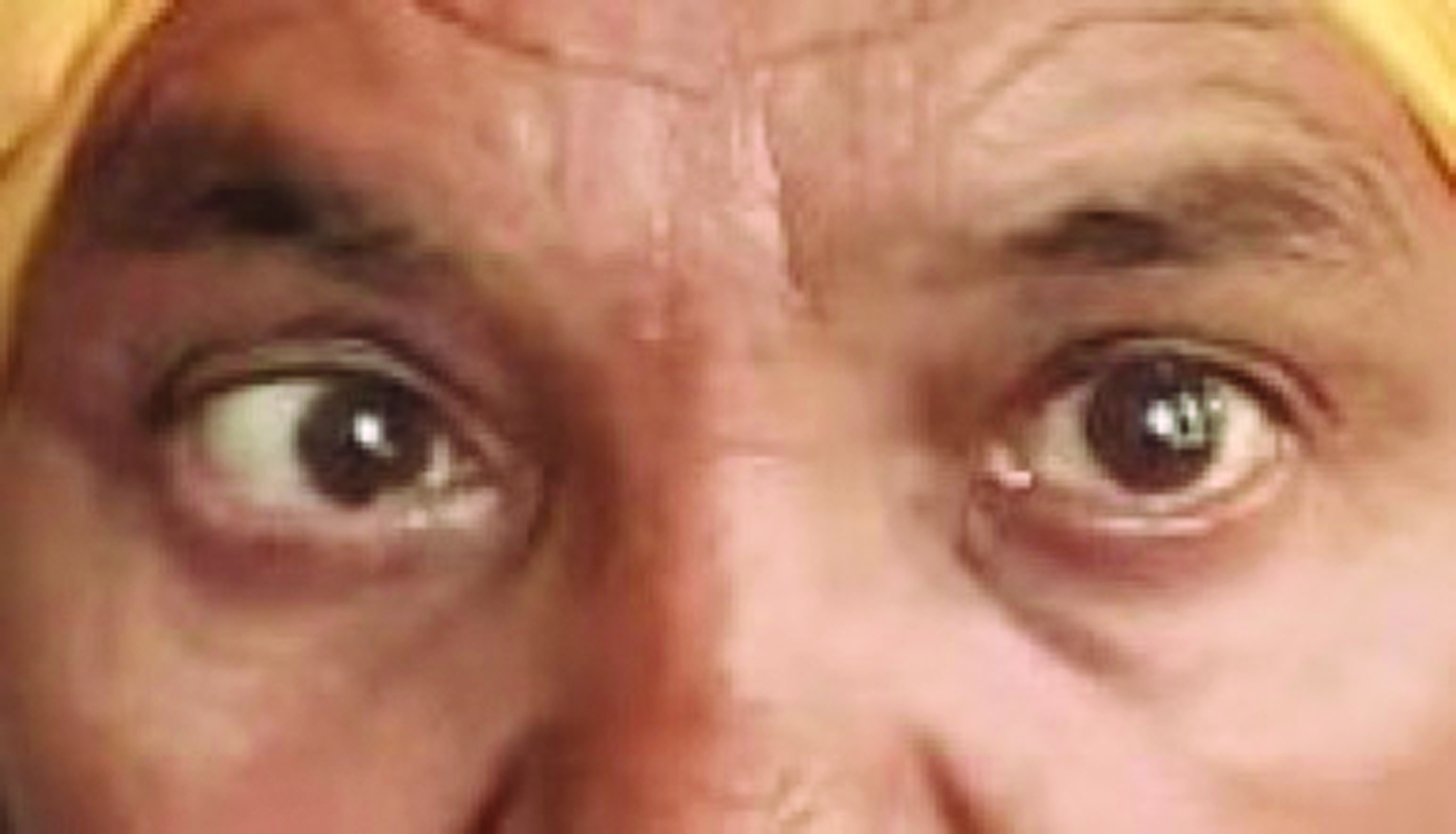 Fig. 5: Follow-up at 1 year: no complaints except for residual sixth nerve palsy on left

Mucormycosis is an acutely infective, aggressive, and opportunistic infection that is caused by members of the Phycomycetes class of fungi. Genera that are commonly associated with acute fulminant rhinosinusitis are Rhizopus, Absidia, and Mucor. Rhizopus is the most common cause of rhinocerebral disease.5

As the patient in the abovementioned case presented with a chronic history of Gradenigo’s triad with ear involvement, diagnosis of petrositis due to complicated COM was made. Also, the indolent course of disease took the diagnosis further away from aggressive fungal mucormycosis. But biopsy and improvement in pain and ptosis after 1.5 g of amphotericin B solved the dilemma and helped in clinching the diagnosis. There have been cases of temporal bone mucormycosis in the literature, which were secondary to ear disease and involved mainly the mastoid part of temporal bone4 causing facial nerve palsy.

Yun et al. described a case of isolated middle ear mucormycosis in a diabetic patient presenting with facial palsy.6 Another case of a patient with diabetes and otocerebral mucormycosis, diagnosed late and with untoward outcome, was reported by Macdonell et al.; involvement of parotid from cavernous sinus thrombophlebitis was found on autopsy.7 The common route of otologic mucormycosis is a preexisting tympanic membrane perforation or the nasopharynx.8

None of the reported cases presented with involvement of petrous apex causing Gradenigo’s syndrome. A similar case of invasive rhinocerebral mucormycosis in a patient with type 1 diabetes has been reported in which the patient presented with intracranial disease, which further progressed to involve the petrous apex.9 Gradenigo’s syndrome as a presenting complaint in case of rhinocerebral mucormycosis with 3-month duration of symptoms along with uncomplicated COM creating a diagnostic dilemma is unique to this case report.

A chronic history and absence of nasal symptoms should not rule out the possibility of mucormycosis. Nasal and otoendoscopy should be done despite the absence of complaints. Rhino-orbital variant can have petrous apex involvement as a complication and in cases where management of COM does not cause improvement of petrositis, fungal etiology should be considered. A blanket therapy including antibiotics and antifungals should be started to avoid intracranial complications or irreversible cranial nerve palsies.