Aims and objectives: This study was undertaken to document vocal fatigue and voice handicap in primary school teachers and also understand the nature of correlation between VFI and VHI-10.

Materials and methods: This study is a cross-sectional survey with convenience-type sampling. A total of 110 healthy females within the age of 22–50 years participated. Nonteachers (group I) and teachers (group II) rated the VFI and VHI-10 questionnaire as per its standard guidelines and the data was subjected to descriptive and inferential statistics.

Results: Results of the study revealed group I to have lower VHI-10 scores compared to group II. However, in the VFI questionnaire, group II scores were higher than group I. Independent t test revealed a statistically significant difference only for VFI at p %3C; 0.05. Karl Pearson’s correlation test indicated a strong positive relationship between VHI-10 and VFI.

Conclusion: From the present study, it can be concluded that vocal fatigue is observable in primary school teachers compared to nonteachers. An increase in VFI scores predicts teachers who are at high-risk of developing voice handicap.

Professional voice users—teachers, for example—are individuals who directly depend upon vocal communication for their daily living.1 Teachers are responsible for imparting knowledge, values, and wisdom to the future of society.2 According to Koufman and Isaacson classification, teachers belong to level II professional voice users.3 Unlike typical laypersons—whose attitude toward voice care is carefree, teachers must be cautious of their voice use and maintain good vocal health. Due to high vocal demands and increased voice usage, teachers are at high risk for dysphonia (or change in voice). Some of the collective voice complaints reported by teachers are a tired voice, dryness in the throat, and increased neck tension among other voice-related distresses.4

Clinical voice evaluation is a combination of subjective and objective measures. However, the traditional clinical voice evaluation lacks patients’ self-assessment of voice. Therefore, the clinician fails to understand the impact of the voice problem on the patients quality of life.5 The literature also suggests that individuals with similar voice disorders may endure different social, emotional, and physical quotients.6 Hence, many voice scientists started assessing the multifaceted phenomena of voice away from the traditional measures, and its outcome is the development of a patient self-assessment questionnaire.7 In this regard, voice handicap index is the most popular among the self-administered questionnaires.6 The voice handicap index measures the functional, emotional, and physical consequences of a voice disorder in an individual. The shortened version of the voice handicap index was coined as voice handicap index-10 (VHI-10).8 The literature reports a very high positive correlation of 0.9 between VHI-10 and the voice handicap index.6

Inevitably, teaching has increased vocal demands. Due to which teachers, with and without voice disorders, have frequently reported vocal tiredness. This symptom of decreased vocal endurance is globally known as “vocal fatigue.” Vocal fatigue (or tired voice) is a physical condition characterized by discomfort in the throat, frequent throat clearing, decreased pitch and loudness range, and hoarse or breathy voice quality that recovers after voice rest.9 Other indicators of vocal fatigue are excessive strain while speaking, neck pain, reduced voice clarity, and voice worsening by the day.10 In this line, to accurately measure vocal fatigue, the vocal fatigue index (VFI)11 was developed. The primary objective of VFI is to delineate patients having vocal fatigue from those who have good vocal endurance. The VFI has been classified into three factors: (1) factor one, which provides information on the tiredness of voice and avoidance of voice usage; (2) factor two, related to the participants experiencing physical discomfort; and (3) factor three, improvement in voice quality after self-prescribed voice rest. A study reported that factors one and three are strong predictors of vocal fatigue, and factor two is not a reliable indicator of vocal fatigue.11 In another study, teachers (with high vocal loading) scored factor two of the VFI as the strong predictor of vocal fatigue.12

Studying vocal fatigue in teachers is essential as it is correlated with how much mechanical stress can the laryngeal apparatus take. Failure to comply with the teaching profession’s vocal demands puts the individuals vocal folds at risk for hyperfunctional voice disorders like vocal nodules.13,14 To date, there is no scientific work taken to profile vocal fatigue in primary school teachers of the Indian population. Although there is no shortage of literature on voice handicap, there is little work documenting the potential relationship between VFI and VHI-10.15 Hence, we felt there was a need to perform a study in this direction. The primary objective of the study was to document VFI and VHI-10 performance in primary school teachers who did not report any voice complaints. Besides, the study also attempts to understand the nature of the correlation between the two questionnaires.

The present study is a cross-sectional survey with convenience-type sampling. One hundred ten female participants within the age of 22–50 years participated in the study. They were further divided into group I consisting of 55 non-teachers (mean age = 34 years) and group II consisting of 55 teachers (mean age = 33 years). Lower primary and higher primary school teachers were recruited from two locations: Mangaluru city of Dakshina Kannada district, Karnataka; and Kelakam city of Kannur district, Kerala. Only teachers who practiced teaching in the English language took part. Participants with vocal fold pathology, hearing loss, and having undergone any head and neck surgery did not participate in the study. Two speech-language pathologists performed a perceptual evaluation to confirm that the participants do not have any changes in their voice quality, pitch, and loudness. Participants gave written consent before data collection. The study was ethically conducted following the guidelines of the Declaration of Helsinki.

Teachers employed in private schools were randomly selected and approached for data collection. Handouts of VHI-10 and VFI were rated as per standard guidelines. Participants were permitted to clarify any doubts regarding the questionnaire with the researcher. Each participant completed the two questionnaires in one session.

Participants of group II reported their teaching style to be a minimum of 30 students per class for 45 minutes seven times per day by the chalkboard mode without using any oral amplifiers. Table 1 represents mean and standard deviation scores of VHI-10 and VFI. Overall, group I participants exhibited lower VHI-10 scores compared to group II participants. In the VFI questionnaire, group I participant scores were lower than those of group II participants. As shown in Table 1, group I and II had the highest VHI-10 ratings for the functional component. There was no considerable variation between the VHI-10 scores of physical and emotional subcategories in group I and II. In the factor 1 and 2 of the VFI, higher ratings were obtained by group II suggesting greater experience of vocal fatigue in teachers. However, in the factor 3, group I participants ratings of vocal tiredness were higher.

The present study aimed to document voice handicap and vocal fatigue in primary school teachers without any voice problems. Handouts of VHI-10 and VFI were distributed to teachers and nonteachers to profile voice handicap and vocal fatigue, respectively. The study results indicated no statistically significant difference in VHI-10 between groups I and II at p < 0.05. Results of VHI-10 indicate that the voice handicap handicap was absent in both nonteachers and teachers. In the VFI tool, statistically significant higher scores were present in group II compared to group I at p > 0.05. This increased score suggests the presence of vocal fatigue in teachers compared to nonteachers. 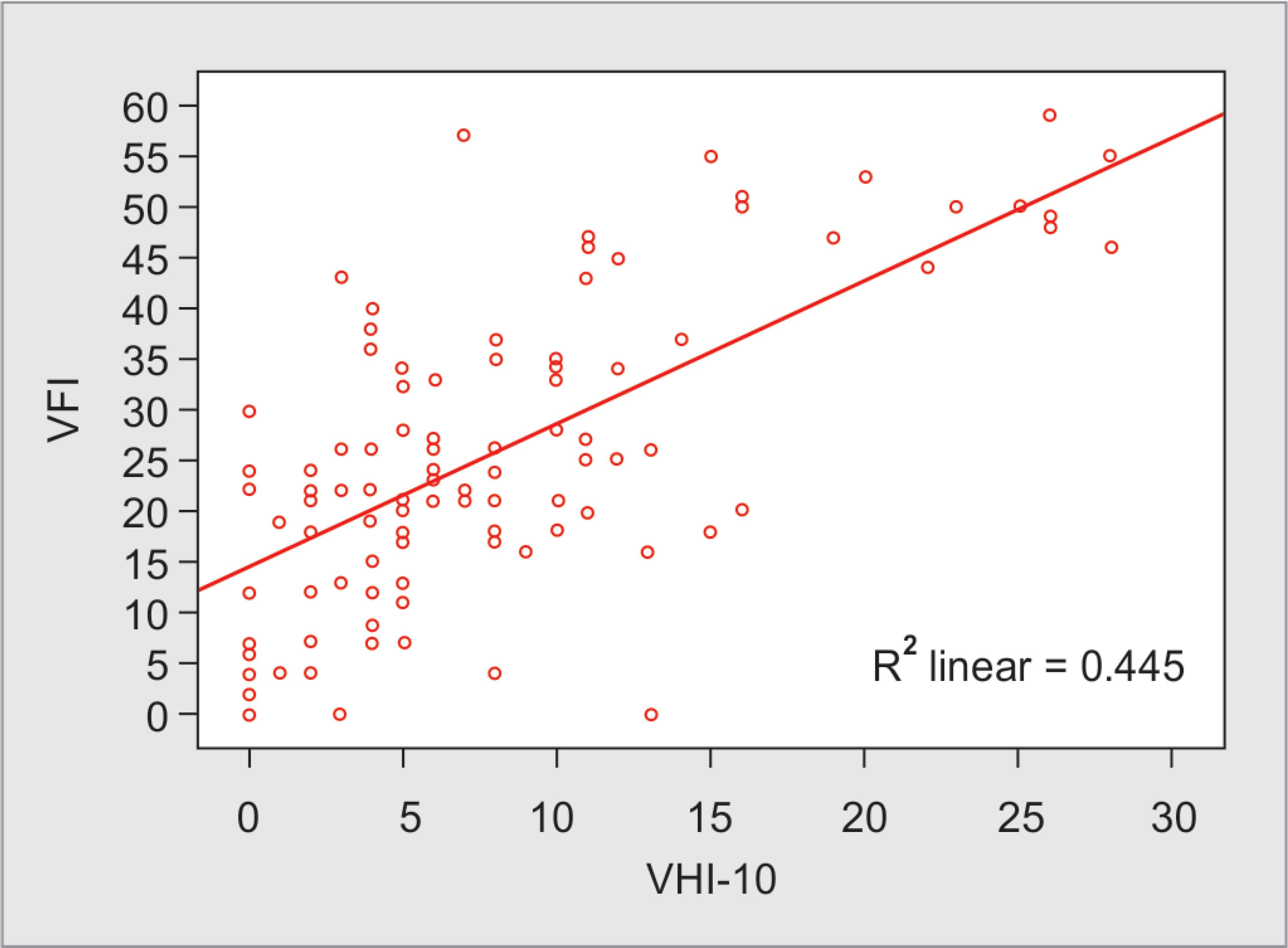 Teaching is a unique profession that has increased vocal demands. The voice usage is unlike the voice phonated by an ordinary person for day-to-day work. The literature in teachers cite vocal fatigue to be one of the multifactorial etiology for having voice problems. Delivering continuous vocal services in substandard teaching conditions and neglecting vocal habits that promote vocal health is a gist of many unhealthy practices in teachers. In India, teachers work in establishments with below-par infrastructure, limited human and teaching resources that force teachers to rely primarily on voice as the mode of instruction. Prolonged hours of instruction associated with other multifactorial etiology increases the risk of developing voice problems.16

Often, teachers have reported increased noise levels in the teaching classroom.2,17 On-site evaluation of 23 classes of four primary schools in southern India measured the average noise level of 62.1 dB(A) in an occupied classroom and 10.6 dB(A) as the teacher’s speech-to-noise ratio. As per the National Buildings Code of India, the maximum noise levels permissible for an occupied classroom is 35 dB(A). Comparing the findings of ground reality with prescribed standards, there is almost double the noise levels in classrooms.18 Under such a noisy environment, a teacher lacks internal auditory feedback and tends to raise the vocal loudness to overcome this sensory shortcoming. The prolonged effect of this compensatory strategy increases the vocal loading on the teacher, in-turn leading to vocal fatigue.

In the VFI questionnaire, a vast number of group II participants scored factor three to be “almost always” and “almost.” This finding agrees with the conclusions of Sathyanarayan et al.,19 who reported teachers experiencing voice problems overcame their vocal concerns by “several home remedies” and “self-imposed neglect.” Their study also said “vocal fatigue,” “dry throat,” and “throat irritation” to be poor indicators of good vocal health. General health issues can often result in upper respiratory tract infections and on–off episodes of change in voice.20 The voice problem’s risk increases by 2.2 times in an individual who has laryngitis, rhinitis, pharyngitis, and sinusitis. Under these circumstances, there are chances of unpredictable voice changes and vocal dryness, which leads to increased incidence of throat clearing and coughing. A similar opinion is also reported by teachers of the present study, who rated factor two as “sometimes.” In the VHI-10 questionnaire, both group I and II participants did not experience any vocal handicap. Such findings validate the participants to be clinically phono-normals.

This study’s results are in agreement with Moghtader et al.,15 who reported a significant positive correlation between VHI and VFI in university college professors with and without voice complaints. But a comparison of VHI-10 findings is not possible since Moghtader et al. utilized VHI that comprises of 30 questions and the VHI-10 has ten questions. Besides, the participants of the study are of different cadres. The reference study considered university-level professors, and in our study, primary school teachers were the participants.

The present study has some limitations. Firstly, we included just female teachers as participants. The reason for the inclusion of only female participants is increased accessibility. Therefore, the study does not provide insight into the relationship between vocal fatigue and gender sensitivity. The second limitation is that the teachers were of a heterogeneous group. Participants from Mangaluru and Kelakam were recruited for the study. It is ideal that the study is conducted with a homogeneous group.

Based on the results of this study, we conclude that primary school teachers have vocal fatigue, and this physiological state is not handicapping them. Vocal folds are powerful biological tools that the teachers maneuver to earn their bread and butter. The outcome of the study suggests that increased VFI scores could be a tool to predict the onset of dysphonia owing to the positive relationship it shares with VHI-10. Therefore, assessing vocal fatigue through VFI must be part of every routine assessment of voice in teachers. Further studies are warranted across a large sample size and the inclusion of male teachers.